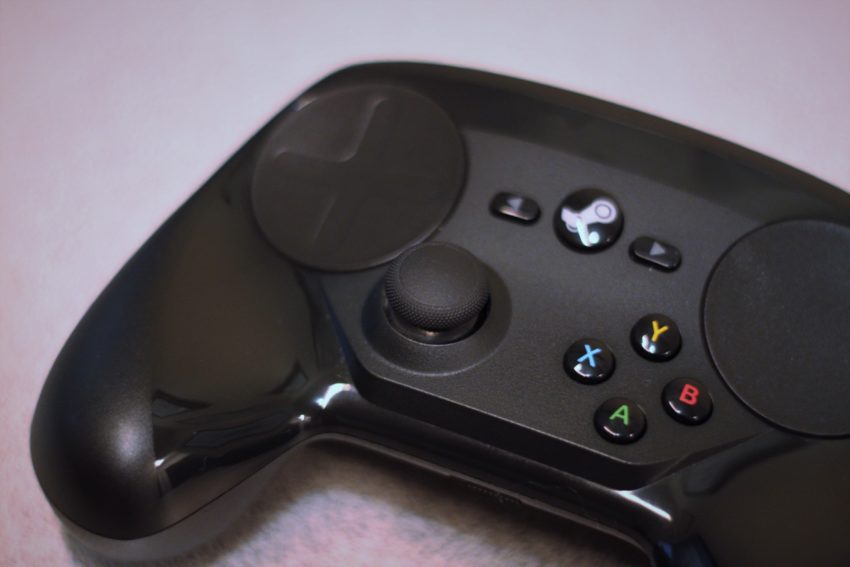 I love to tinker with things, which is why I was drawn to the weird but customizable Steam Controller. It’s become somewhat of a rarity these days, as it’s been discontinued, but it has become a polarizing device with a unique draw to PC gamers. People either love it for its quirky, do-whatever-you-need-it-to-capabilities or hate it for its constant hand-holding and limited pick-up and play accessibility. There is almost no middle ground or grey area.

The design itself is pretty unique: on the face of the device there are two touch-sensitive trackpads along with an analog stick, and the usual ABXY buttons are the same color scheme as on an Xbox controller, so on-screen prompts are spot on in most games. Among the 14 keys are triggers, shoulder buttons, rear paddles and a light-up Steam home button, which turns the controller on, then brings up an overlay in-game with the Steam software or launches the app’s controller-friendly Big Picture mode. The controller is meant to work exclusively with games in the Steam store which may be a limitation for many gamers.

There are a lot of questions about the design, like how do the trackpads stack up as replacements for D-Pads and control sticks? By now we know traditional controls feature the two-stick layout, so the Steam Controller dumping that for a pair of touchpads is quite the bold move. The two pads feature haptic feedback which is adequate, but not a complete substitute for the tactile feel of an analog stick. You can lose your thumb’s location on the pads, as there aren’t any discernible ways to feel that you’re closer to the edge or centre as you do with an analog stick, which has definite limits and a springy-ness as you move it. You just have to get used to the amount of space you have with a trackpad, which requires time and can add to the frustration of using this gamepad.

This is a huge problem. Controllers are meant to provide control (duh). If you’re not used to the way it works, or if it takes too much time to get used to it, you lose interest and grab something else.

Everything else works as expected though: the actual analog stick works perfectly, the triggers have plenty of travel and the shoulder buttons are clicky and responsive.

In theory, it should be a fine controller, but it’s something that requires practice, which turns some gaming sessions into chores. The fortunate side of this is that the controller is extremely customizable. You can easily use the controller for games that aren’t designed for gamepads, like strategy games, using the trackpad instead of the mouse, setting up macros to mimic keyboard sequences and even modifiers to make certain buttons perform several actions depending on what’s triggered with it. It even has a gyro sensor that can be used to help with “twitch” aiming in shooters or steering controls in racing games. In games like Lord of the Rings: Shadow of War, or Batman: Arkham City, I can configure the paddles to perform one of the takedown moves, which usually require two simultaneous button presses. This way it can be done in one click of the paddle without even removing my thumbs from the controller’s face. You can even use it on your desktop if you desire, which will appeal to gamers using their PC in a home-theatre setting, or the Steam Link game streaming software. I’ve used the controller on a Raspberry Pi running Steam Link, and it worked in that setting as well.

It requires a lot of setup, but there is a very active community of Steam Controller users, who share and rate their own configurations for each game. You can modify other configurations, letting you dial in more or less sensitivity for example or copy them so you can apply the same setup to another game. However, to use the controller with games that aren’t sold or launched from the Steam app, you have to manually add them to the application, or get some third-party apps as a workaround. It’s a mild inconvenience but furthers the idea that this controller needs lots of time to make it work perfectly.

Physically the controller feels a bit cheap. It doesn’t have heft, and it doesn’t use any high-end materials. The force-feedback rumble is performed by the trackpad haptics, so it’s pretty weak. It uses two AA batteries (which you can see through the gaps in the back) or can be wired with a micro USB cable, which is handy and it doesn’t seem like a power hog, requiring new batteries every week. I’d recommend it to gamers with a large and diverse library of games, not just shooters or action games, and those with the patience to set up the controller to suit their needs for every game.

When configured correctly, the Steam Controller seems good enough to use for almost any game. The forums and subreddits are full of users who use it over the traditional keyboard and mouse for action games like shooters, and it’s versatile enough to use for racing games and even strategy games that aren’t typically made for gamepads. After a few years and a steep learning curve, I do prefer it when gaming on my PC, but if you don’t want to tinker around and just play, it probably isn’t the best choice for you. I can’t remember exactly how much I paid for the controller, but it was far cheaper than my Xbox One Elite controller or Logitech G920 steering wheel and closer to the price of a regular Playstation Dual Shock or Xbox One pad. Unfortunately, Valve has discontinued the Steam Controller, making it only available in the second-hand market.

Be sure to check back soon as I cover the other controllers in my collection.